Over recent days, I’ve been suckered into one of those Facebook ‘tag a friend’ chains which I usually avoid like the plague. This time I enjoyed reading about my Facebook friends’ ‘go to’ albums. These didn’t necessarily have to be the albums that you regarded, in a cerebral way, just those you found yourself wanting to put on the stereo.

So I thought, as I hit Day 3 of this Facebook scam, that I’d share my first few entries on my blog.

The musical equivalent of Jack Kerouac’s ‘On The Road’, a booze soaked, down at heel, jazz bar singer’s take on the underside of urban American (night) life presented by Waits with a ‘melancholy tear’ in his eye, packed with sharp observations and rapid-fire witticisms.

All of this is adorned by a band of crack jazz musicians backing Waits’ piano and vocals which veer from swoon to growl and even scatting. The quality of the songs remains consistent across a broad stylistic range which adds up to a near perfect album.

Amongst the many gems ‘San Diego Serenade’ stands out as perhaps the most bittersweet break up song in rock history. This is my late night ‘go to’ album (though I’d happily put on any other time too).

When I think about my favourite albums, one name keeps re-occurring. Not an artist, but a producer – Daniel Lanois. Of course, it’s not strictly right to draw a distinction between producer and artist because what albums like these show is that the right producer is very much an artist integral to the process of making truly great albums in collaboration with the names which adorn the cover. In addition, Lanois is a fine artist and musician in his own right. If you doubt the proposition, that a producer can contribute ‘as much as any musician’, read Chapter 4 of Bob Dylan’s memoir ‘Chronicles – Volume 1’ in which Dylan said of the recording of his ‘Oh Mercy’ album with Lanois:

‘He slept music. He ate it. He lived it. A lot of what he did was pure genius. He steered this record with deft turns and jerks, but he did it.He stood in the bell tower, scanning the alleys and rooftops. My limited vision didn’t permit me to see all around the thing’.

Teatro is my favourite Lanois produced album and one of the greatest country albums ever – though to even label it a country album does it a disservice. Puts it in a box too constricting for the beauty within it. Inside the Teatro studio, built by Lanois in an old cinema in Oxnard, California, Lanois assembled a band of master musicians to create a dancehall feel inspired by Nelson’s earliest days playing in dance bands in Texas: Nelson’s lead vocals and spare acoustic guitar, Emmylou Harris’ backing vocals, Robbie Nelson’s keys and Steinway piano, the dual percussion of drummers of Tony Mangurian and Victor Indrizzo (a left and right handed combination playing a single extended kit in perfect combination) and Daniel Lanois’ guitar, mandolin and (overdubbed) bass.

Together they produced an alchemical rendering of a string of wonderful songs including Nelson’s ‘I Never Cared for You’, ‘Everywhere I Go’, My Own Peculiar Way’ and ‘Home Motel’ and Lanois’ ‘The Maker’. To my mind these are the definitive forms of these songs. This album is important to me because it completely exploded the last vestiges of my preconceptions of country music which, up until that time – despite my love of country rock – still remained somewhat constricted by a misplaced and prejudiced belief that ’straight country’ was a bridge too far. It was life-changing for me and continues to be one of my go-to albums.

If you get a copy of the album, make sure its the recent 2017 ‘The Complete Sessions’ re-issue with bonus tracks and DVD film of the band live in the studio shot by Wim Wenders. 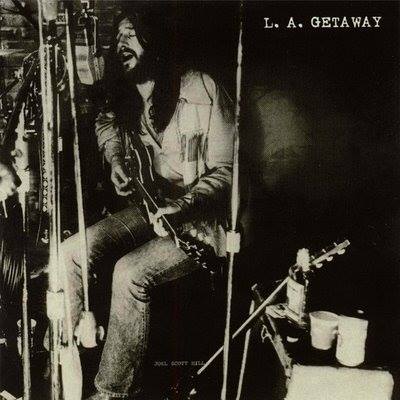 For a period from the mid-60’s and into the 70’s the L.A. music scene became one of the greatest scenes in the history of rock music, particularly if – like me – you love the country rock sound which lay at its core. The mythology of that scene and its central players is well documented in Barney Hoskins ‘Hotel California’. That scene gave us artists such as Jackson Browne, The Eagles, Neil Young, Stephen Stills, David Crosby, Graham Nash, Joni Mitchell, James Taylor, Gram Parsons, Delaney & Bonnie, Ry Cooder and John Fahey (to mention but a few). Albums by those artists provide one of the backbones of my music collection (not to mention the roots of today’s ‘Americana’ sound).

Amongst that scene were three outstanding musicians – each merely footnotes to Hoskyns’ book:

In 1970, these three musicians got together in the studio over a series of sessions as ‘L.A. Getaway’, a supergroup (of sorts). The sessions also featured a raft of stellar guest musicians including Booker T Jones, Spooner Oldham, Mac (Dr John) Rebennack, Leon Russell and John Sebastian. Backing vocals were provided by Clydie King (Little Richard, The Supremes, Ray Charles, Rolling Stones and Neil Diamond).

The result was this self-titled L.A. Getaway album which, with a running time of only 40:17 and just 9 tracks, is an absolute gem, featuring a mix of outstanding songs from the likes of Mac Rebennack, Dan Penn, Allen Toussaint, Jerome Green, Booker T Jones and Chuck Berry together with original contributions by Etheridge and Hill (the majority of which were written specifically for the project). The album’s strength is the integrated sound created by the band and their (better known) guests, which manages to be both laid back and gently propulsive, through which the pristine guitar and fulsome piano/organ parts weave mercurially, providing the perfect bedrock for Hill’s dextrous, yet invitingly relaxed, vocals.

Several of the tracks here coulda been, shoulda been, classics – the rollicking blues workout of ‘Bring It To Jerome’; the blue-eyed soul of ‘Long Ago’ on which Hill & Etheridge share vocal duties, and the plaintive gospel/blues of Booker T Jones’ ‘Ole Man Trouble’ featuring Clydie King’s gorgeous backing vocals; foremost among them.

The original liner notes from the album, released in 1971, suggested that the band would soon re-convene for a second album. Alas, that never came to pass. So we’re left with just this single testament to what may have been the best undiscovered band of the 70’s. It ranks up there with some of the best work to come out of that L.A. scene. So far as my ‘go-to’ albums it is on my stereo as often, or more, than (most of) the others.