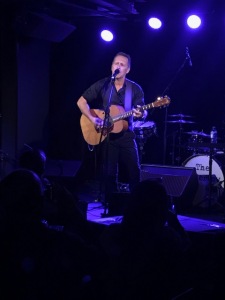 I first encountered Mark Seymour at the helm of Hunters & Collectors when, at a party at a local sailing club, the sounds of the newly released ‘Human Frailty’ sent the mostly 16 year old partygoers into a frenzy, singing along and dancing on tables – some even swinging from the steel rafters supporting the club’s roof. I headed straight to the source of the music, a turntable in the club’s kitchenette, on which spun some kid’s freshly minted copy of the album.

Thus began my affair with the music of Mark Seymour. Over the years I have seen him numerous times in venues ranging from the Sydney Cover Tavern to Selinas, in solo guise at Pier One and the Hunna’s recent reunion at the Enmore. I’ve collected each of his albums with the Hunters & Collectors, solo and, more recently, with the Undertow.

Tonight’s performance at Sydney’s iconic Basement was a fitting culmination of these years of fandom. Seymour remains at the top of his game – relaxed and with a focused intensity. Beside him, the Undertow (Cameron McKenzie (guitars), Peter Maslen (drums) and John Favaro (bass)) is a crack unit which serves as the perfect support providing highly accomplished playing and, most importantly, knowing precisely when to hold back to showcase the songs and when to step forward and lift them to the next rousing level.

The Basement’s low ceiling, crisp sound and cabaret tables provides the perfect setting in which to truly appreciate the songs – if only it wasn’t for the disrespect of the punters huddled around the bar, the transient self-obsessed blowhards whose constant talking made you feel sorry not only for those who’d come for the music but for the band and the real fans who’d missed out on tickets to the sold out show.

Each song is allowed to exert its own personality aided by Seymour’s informative introductions which provides an invitation to the listener to delve more deeply into the songwriter’s intent – for tonight it is very much about the songs and the songwriter. As the two sets unfold the themes of home, country and family emerge – coupled with a sensibility which mixes a robust Australian tone with Celtic songwriting tradition.

What could be more Australian than the opening lines of Home Free: ‘Shark attack on Tuesday/They shut the beaches down’; or Sylvia’s ‘Houses on the avenue/Where the eucalypts grow tall and strong’? The sense of place is strong with Seymour explicitly referencing “the great brown drain” which runs through Melbourne in “Westgate” – a very working class tale of Eddie Halsall, a rigger on Melbourne’s Westgate Bridge, who narrowly escaped death 1970 as ‘Hell broke free when the bridge came down’. And not one, but two, diversions to Adelaide. It’s there too in the historical ballad Castlemaine. But most of all it’s in Seymour’s fine tales which pay tribute to fallen Australian servicemen in ‘What’s A Few Men” and the delicate funeral tale of “Tobruk Pin”.

Then there’s the strong theme of family which is physically represented in the presence of Seymour’s daughter Hannah on supporting vocals adding both an extra dimension to the songs and familial intimacy to the performance. Seymour’s clear paternal pride is evident frequently throughout the night as he flashes glances and a wide smile across the stage. The sense of family is also present in the songs themselves. In ‘Classrooms & Kitchens’ Seymour reflects on his schoolteacher mother – from the early years in their ‘small country house’ in Benalla, Victoria listening to ‘Blue Hills on the radio’ to later times in a nursing home in Kew singing ‘Hail Mary’ and ‘counting angels’. Then Seymour turns to his father in ‘Kosiosko’, recalling the childhood moment, ‘driving high on a switchback road’, when he first discovers that his father was not the infallible person he thought he was: “I never get over the first time/When I saw that he was not that strong/Saw the white knuckles riding on the steering wheel/And I knew that he could steer me wrong”.

Yes, these are very honest Australian tales, told expertly by Seymour – a master songwriter – whose status as an Aussie rock icon often overshadows his rightful position, along with Paul Kelly and Don Walker, as one of the country’s finest songwriters. It’s a craft which Seymour  developed during the Hunters & Collectors days (witness Everything’s On Fire’s ‘kick the can around until all memory ceases’ and ‘fingers like ginger roots’) and continued through a string of sophisticated albums both solo and with the Undertow.

Underlying each of these Australian tales is a strong celtic songwriting tradition which is glimpsed intermittently thoughout the set on songs such a ‘Master of Spin’, ‘Football Train’, ‘Irish Breakfast’, a fine rocking cover of The Pogue’s siren tale ‘Lorelai’ and Seymour’s closing solo acoustic rendering of the traditional ‘Parting Glass’ (made famous by The Clancy Brothers).

Of all the times I’ve seen Mark Seymour, in various guises, perhaps tonight is the most focused, intense, pure and complete rendering of his songcraft. With the assured support of The Undertow, he presents these songs, over two hour long sets, for our appreciation with finely tuned arrangements which are equally capable of rousing rock and intimate solo moments – always in service of the songs.