Day 2 starts with Citizen Cope in the Jambalaya tent. Thanks to a welcome sleep in and an invigorating swim at Wategos Beach, we arrive a little late to the show which is an enjoyable folk soul blend grounded by solid songs and engaging performances from lead man Clarence Greenwood and, especially, the keyboardist who was clearly enjoying every moment, shooting satisfied glances to the drummer. The enjoyment was contagious.

We wander across to the adjacent Crossroads stage (where we will end up spending the whole evening) stopping to grab a beer from the craft beer tent. A welcome addition to the Festival which has suffered in the past from Toohey’s longstanding corporate deal and a selection of mostly characterless beers (TED and Heineken). So it’s fabulous to have access to the likes of White Rabbit and Little Creatures, as well as local Byron Bay Brewing on tap.

So, armed with our craft beers (mine’s a White Rabbit Dark Ale), we head into Little Georgia, chosen from a positive quote from Bernard Zuel on the Bluesfest app. The band is comprised of Ashleigh Mannix and Justin Carter who share vocal and guitar duties. The songs are endearing country folk with a pop edge. For mine, Mannix’s voice is a bit grating, especially when she tries for the big festival moment, but Carter’s guitar, mandolin, blues harp and relaxed vocals make him the clear star of the show.

Next up were the Teskey Brothers back at the Jambalaya tent. I’d managed to catch a small record launch gig about a year ago at Mojo Records in the city and knew what to expect. And, despite the absence of bass player Brendan Love (‘over in the sick tent’), the Teskey Brothers deliver. 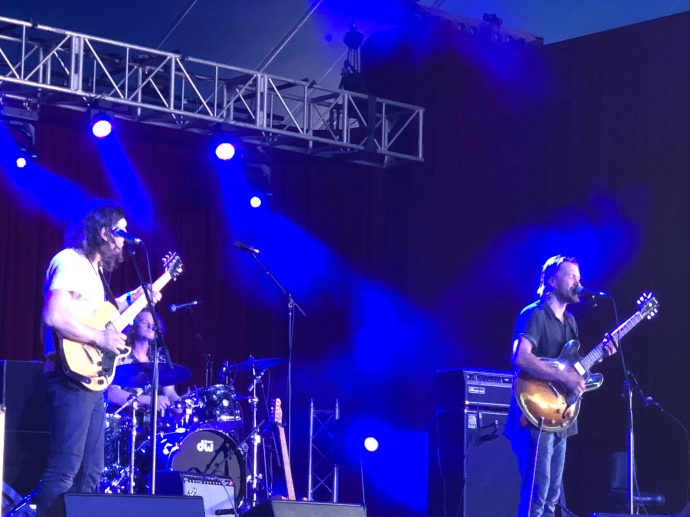 Josh Teskey’s sweet soulful voice is a wonderful instrument which immediately defines the band’s sweet southern soul blues at moments crooning, testifying and, even scatting. But the Teskey’s are far more than one one trick-pony, this is a band in the true sense comprised of way the whole band gel together is remarkable, born of 10 years of playing together (somewhat under the radar until the last year or so).

Brother Sam’s guitar work is soulfully elegant, underpinning the powerful strains which the band combines to create a slow build which consistently promises to break loose before pulling back again at just the right moment until…it doesn’t. By the time the band really go for it, in the extended outro to the final song of the set, the tension has built to a level adding a powerful sense of relief and euphoria. Not bad for an afternoon slot – and they’ll be even better on Sunday when Love rejoins them on stage.

We caught the end of Andre Cimone, former school friend and band member of Prince. You can see the connection in the confident (arrogant) pimp on-stage persona complete with leather vest, pink Helton hat and sunglasses. You can also hear it in the Minneapolis pop-funk of the music. What you can’t hear is genius.

To complete the Prince double-play, Hartz is billed as having been personally invited by Prince to come to Paisley Park where he received mentoring by the Purple One. Again it shows in the brash showmanship including a backdrop featuring ‘‘hartz’ written, like an autograph, in his signature font (all lower case). Again, while Prince’s genius (almost) made his ego forgiveable, its harder to take from this young upstart. He may be playing the Mojo tent at Bluesfest but his bravado is turned up to Glastonbury levels. That being said he is working hard to justify it and his songwriting and guitar makes it easy to see why he got that invitation. Worth checking out for a few songs but not the reincarnation.

Hurray For The Riff Raff

Hurray For The Riff Raff is the artistic vehicle for intriguing singer-songwriter Alynda Lee Segarra. For once, the back-story is not just a matter of marketing spin. Seeing her live on stage you can immediately recognise where this singular artist is coming from. It’s there in her unforced sneer, the way she works the stage with an urgent, yet pensive, force and in the anger and defiance of the songs, mostly coming from her 2017 concept album, ‘The Navigator’.

That album represented an artistic u-turn for Segarra whose 2014 release ‘Small Town Heroes’ was a standout Appalachian folk album with enough power and attitude that it could have been subtitled ‘O Sister Where Art Thou?’. Today’s HFTRR is a new beast and one that showcases her always powerful voice with a tougher, more muscular, musical vision infused with rock & roll swagger, liberal dashes of her Puerta Rican heritage and riot grrl attitude.

What we witness on stage is the performance of a singular artist with an unrelenting vision which is heartfelt, passionate and not afraid to be somewhat prickly. The music seems to be oozing from her core rather than merely being ‘performed’. 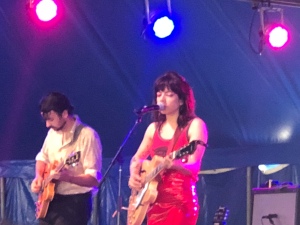 When she launches a bitter attack on Trump’s USA, this is not on-trend value signalling, its a visceral and urgent call to arms aimed at an apathetic public (and music business):

‘Now all the politicians/ They just squawk their mouths/ They say ‘We’ll build a wall to keep them out/ And all the poets were dying of a silent disease/ So it happened quickly and with much ease.’

Her unreleased ‘Kid’s Are Dying’ which she introduces with a tribute to a small artistic community which is speaking out (and which is based on a poem by poet Langston Hughes), is a brutal assault on both US racial culture and apathy in the face of repeated deaths of young children of racial minorities.

The set is brought to a crescendo with that track and her breakout track ‘Living in the City’ an uncompromising violent tale of a young female immigrant in New York (“Oh, I’ll take you to the stairwell/ And give you something I can offer/ You know the heart is not the hopeless/The heart is a lonely hunter’) and the positivity of her uplifting, anthemic, ‘Pa’lante’ (which means moving forward).

Then, as if in recognition of the intensity of the the set, she sends us away with a tension relieving re-casting of Springsteen’s ‘Dancing in the Dark’. Even then, Segarra can’t help adding one last barb noting that Springteen’s ‘The only Boss I answer to.’

We head over to the Crossroads tent, grabbing a reinvigorating double macchiato from the Bun Byron Bay coffee tent, before moving down towards the front. Juanes is captivating with his up-tempo Latin soul, poster boy good looks and a rare on-stage charisma. We can see why he’s such a big star and would have liked to have enjoyed more but such is the nature of Bluesfest – even with multiple slots for most artists, there are some which will run into conflicts.

As the crowd begins to exit, we move forward to grab a front row position which will see us through for the remainder of the night (excepting the $300 per night interlopers who reflect a flagrant money grab at odds with the festival spirit – a fairly rare misstep by Noble). Still, the philosophical will reason that the view is still uninterrupted (most of the front rows are seated and with a gap from the rest of the audience) and the sound is actually better a little further back from those front speakers.

Youssou N’dour will start our evening triple-bill off in high style at 6.30pm. He’s billed on the Festival app as ‘the most famous singer alive’ and for his collaborations with Paul Simon and Nenah Cherry. I remember being captivated by his voice on those ‘cross-over’ recordings but, to my detriment, never followed up to discover more. Still festivals are a great time to make up for those omissions and to discover music and genres which you might not have taken the time to explore at home in the comfort of your own home and album collection.

From the outset, Ndour and his band are spellbinding, his tenor voice a nimble instrument of beauty, warmth and dexterity. The songs are mostly mostly written in the Serer language native to Senegal where Ndour is credited as establishing the modern form of the traditional Senegalese musical style known as mbalax. That he currently serves as the Minister of Culture is reflective of the importance of art and culture to the Senegalese nation (compare Mitch Fifield, Australia’s Minister for Arts a career politician and son of two bankers).

Also taking turns at dominating the stage at regular intervals was acrobat Moussa Sonko whose wild leaping and somersaulting dances in bright loose costumes add a comedic festival vibe to fill the tent. Though, whether they add to the fun or distracted from the beauty of the band and N’Dour’s musical performance is a matter of personal preference.

While it was the big collaborations ‘You Can Call Me Al’ and ‘7 Seconds’ which really got the crowd going, the spirit of the music and N’Dour’s sweet vocal dexterity had the crowd mesmerised for the entire 90 minute set, earning the respect and admiration of all those around me.

Jimmy Cliff is another staple on the festival circuit having appeared at least a couple of time previously. Despite that I’ve never caught more than a few passing strains taking a short between set coffee break behind the Crossroads tent. Tonight I see his set up front and centre. It’s fun, upbeat and engages the crowd with well known originals ‘You Can Get It If You Really Want’, ‘Vietnam’ and, especially, covers like Johnny Nash’s ‘I can See Clearly Now’ and Cat Steven’s ‘Wild World’.

Enjoyable though it is, Cliff’s voice is not that great, the band solid but not in the class of some others on the programme and the rocksteady reggae lite arrangements were always a pale shadow of the likes of Marley. Ultimately, the set remains for me just a brief interlude between two other great festival sets.

There’s not much movement in the front ten or so rows between sets as, positions established, we sat, backs to the barricade, and waited for Plant’s arrival as the sound check took place behind us. When he arrived, Plant did not disappoint. He remains the consummate rock icon, commanding the stage, and steering his multi-faceted band, with the demeanour of a spiritual Svengali – which is to say relaxed but with a quietly intense focus.

For those looking for a pumped up run-through of Zeppelin’s greatest hits, sorry, but that was never on the agenda. But for those tuned into Plant’s recent work with The Sensational Spaceshifters the rewards are plentiful, if a little more mysterious. 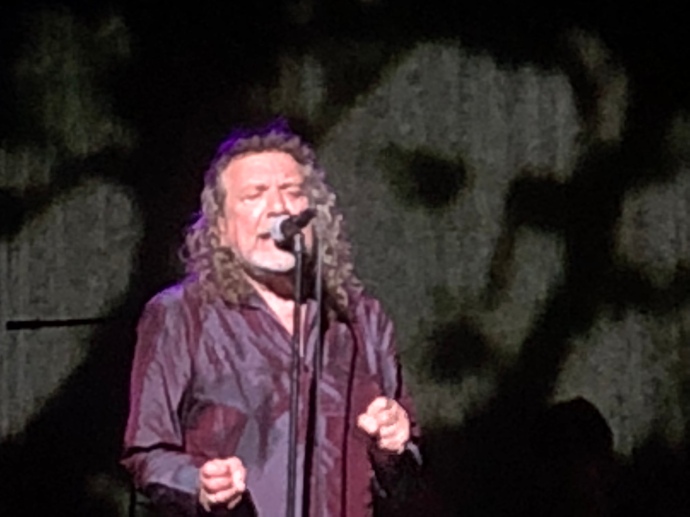 The performance’s major rewards came from the band’s rhythmic force and snaking instrumental interplay through which Plant’s still incendiary vocals ebbed and flowed, emerging like a ship from the fog only to be enveloped again by the music. It was a masterful performance from Plant and a band which, earning its name, was certainly sensational and constantly shifting both shape and space. Violinist Seth Lakeman fitted right in with the band so seamlessly, further broadening the textures, that it is hard to believe that he is not a fully fledged Spaceshifter.

By the time the set reached its end with a crowd-pleasing workout of ‘Whole Lotta Love’, those gathered had ceased expecting, or even craving, the big Zeppelin hits. Even then, as Plant unleashed their biggest anthem, he couldn’t resist weaving it through both ‘Bring It On Home’ and the traditional ‘Santiana’. He’s earned that right.