The legendary Kris Kristofferson took to the stage, with his trusty acoustic guitar slung over his shoulder, and raised one arm into the air in acknowledgment of the warm reception from the crowd.

He was surrounded on the stage by none less than The Strangers, the late Merle Haggard’s long time band featuring Scott Joss (fiddle and vocals), Doug Colosio (keyboards & vocals) and Jeff Ingraham (drums).

As we sat in the State Theatre’s plush crimson velvet seats, watching Kristofferson’s entrance and anticipating the show, it was hard to ignore that Kristofferson’s presence, though retaining a hint of his trademark smirk and glint in his eye, was withered and showing the effects of his 83 years. You could say he looked nearly faded as his jeans.

As he launched into opener Shipwrecked in the Eighties, it became clear that those years had also affected his vocals and guitar playing. 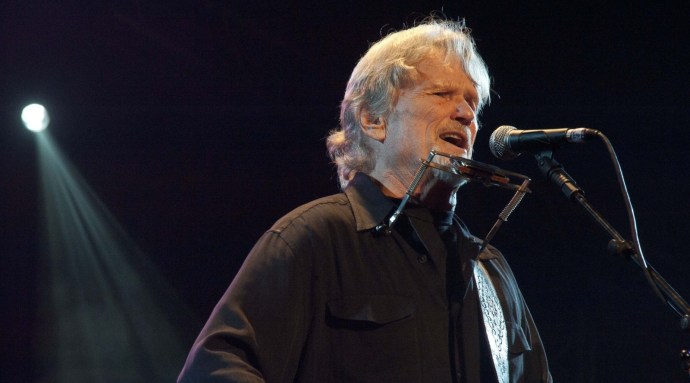 The Strangers provided a solid base for Kristofferson’s songs with flourishes of Joss’ fiddle and Colossio’s keys adding accents to the too sparse palette of Kristofferson’s vocals and minimalist acoustic guitar. At times, it seemed the band showed too great a deference – a reluctance to overshadow Kristofferson. As a result, they hung back which left Kristofferson’s performance limitations on display and hard to ignore. It was, at times, uncomfortable to watch. [A friend of mine, and fellow Kristofferson fan, called it, rather less kindly, a ‘train-wreck’].

The tracks where the Strangers asserted a firmer hand worked best, where Scott Joss’ excellent vocals swooped in to play a strong supporting role or the Merle Haggard covers, and Joss’ own ‘How Far to Jordon’, on which he took the lead vocal. But we had come to see Kristofferson perform his fine songs, so the band’s reverence was understandable. Still, many of those songs would have benefitted from a ‘second’ guitarist given Kris’ playing was rudimentary (at best) and failed to deliver the ease and beauty of the finger picking melodies essential to the songs.

It was hard to quibble with the set-list though, which included a long list of Kristofferson’s greatest compositions including: Darby’s Castle; Me and Bobby McGee; Best of Both Possible Worlds; Casey’s Last Ride; Loving Her Was Easier (Than Anything I’ll Ever Do Again) [all from the first set] and Just the Other Side of Nowhere; Duvalier’s Dream; Jesus Was a Capricorn; Sunday Morning Coming Down; For the Good Times and Why Me [from the second set]. It’s just that we didn’t get versions which did justice to the brilliance of the songwriting or came close musically to recorded versions. Too often Kristofferson’s delivery failed to enunciate the superb lyrics clearly and the much-loved melodies failed to emerge.

Luckily, we all knew those tunes so well that our imagination was able to fill some of the gaps and salvage some enjoyment out of the undeniably brilliant batch of songs. Towards the end I even started softly singing along  (something I usually detest when I’ve come to hear the performer) and was joined by others around me at the front of the theatre in a concerted communal effort to somehow offer our support to Kristofferson by willing a bit of melody, life and energy back into the songs.

When the show concluded, the audience, in spite of it all, rose to its feet to give Kristofferson a rousing standing ovation. It was a gesture of love and generosity, but one which left me personally conflicted. Should I stand to join the ovation so generously offered by those around me? Should an ovation be offered to acknowledge the life achievement of one of the greatest songwriters of all time or should it be reserved for a great performance on the night in question? (I remained seated.)

Ultimately, the pervasive feeling throughout the evening was that, as far as live performance goes, it was impossible to deny that our love affair with Kristofferson was well & truly over but, despite it all (as revealed by the ovation and much post-show chatter) the audience was determined to do its best to make believe we loved him one more time. For the good times.